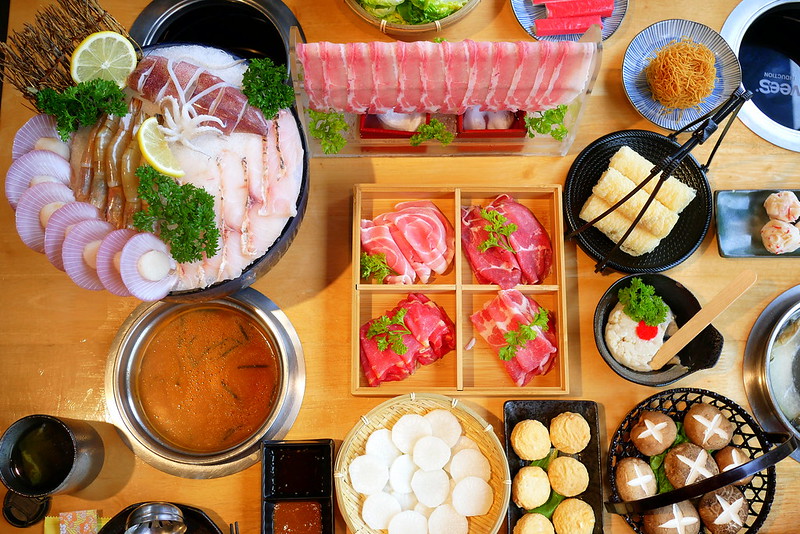 The shabu shabu dining experience originates from Japan, where thin slices of beef is being swish to and froth in pots of boiling clear konbu and dashi soup. Recently, we found a favourite place for shabu shabu in KL – Shabu Gion. Unlike other Malaysianised shabu shabu places with fish balls and mock meat, Shabu Gion offers us a truly Japanese swish swish experience with delicious MSG free broth and fresh ingredients. 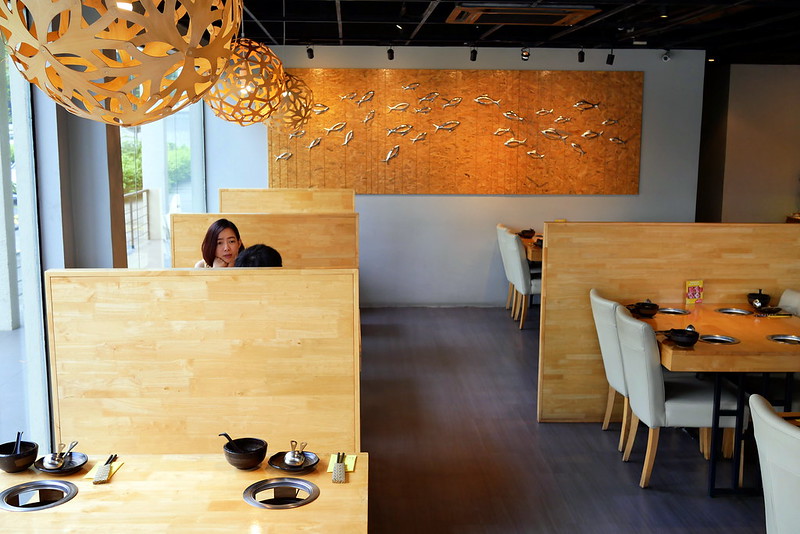 The best thing without a doubt is the atmosphere and prompt, friendly service. The wood-lined interior evoke a calm and tranquil feeling. 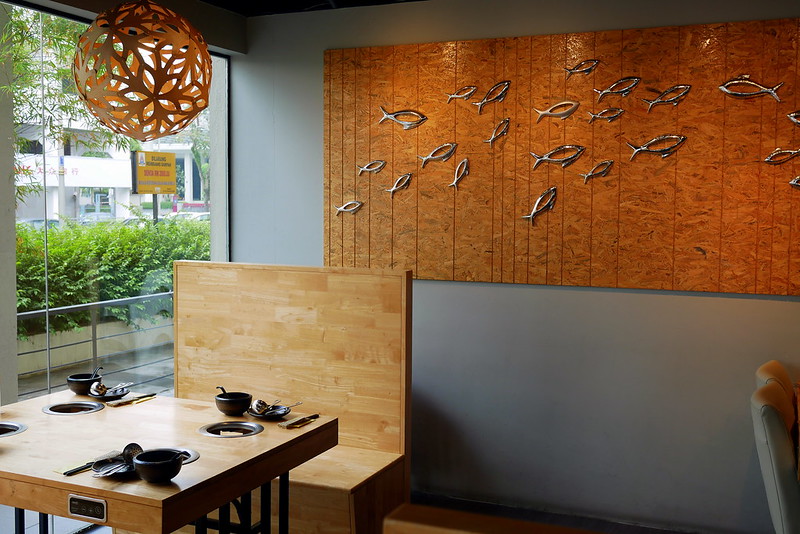 Another plus point is Shabu Gion offers custom-fitted soup pots for each customer. These customised pots are powered by electricity and they will switch off automatically after the soup has boiled for some time. 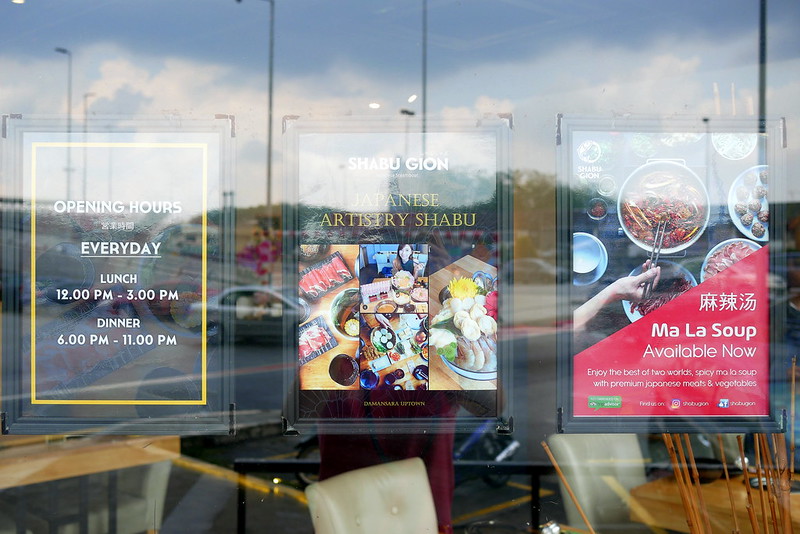 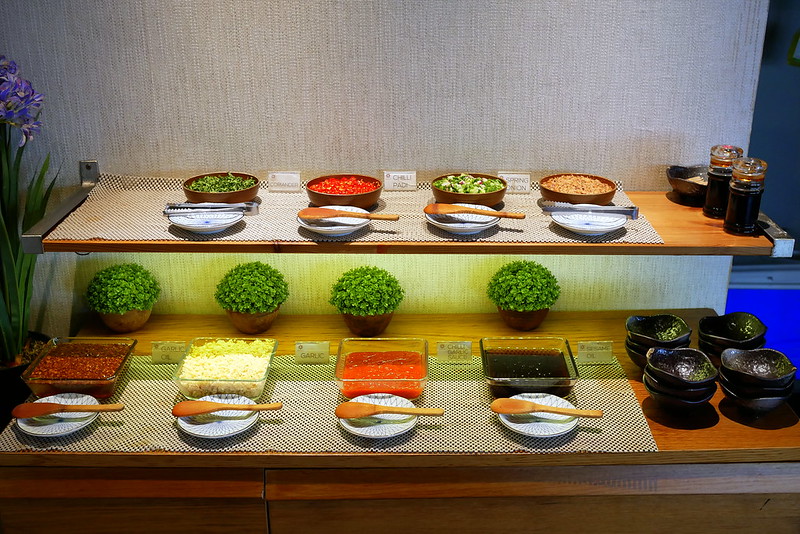 The chilli, special sauces and various toppings served with the dishes also worth a mention. 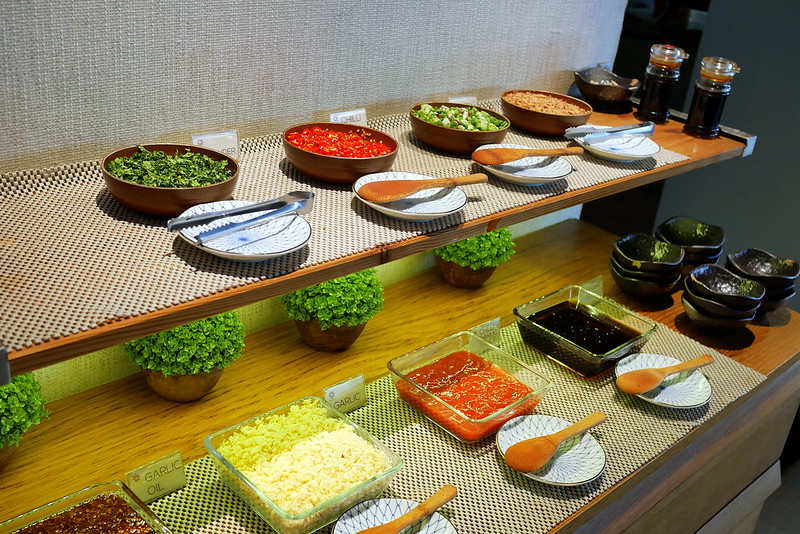 The homemade sauces are so flavourful, especially the spicy one! It has just enough kick to complement the fresh ingredients. 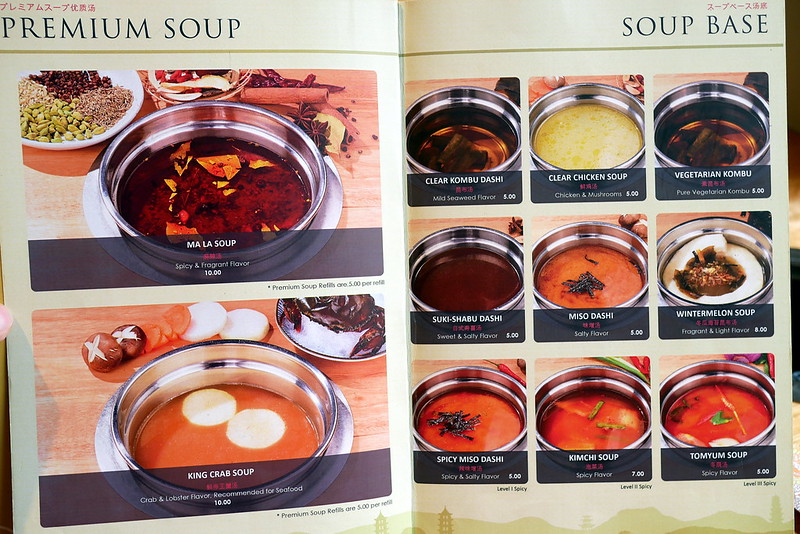 Shabu Gion takes pride in their soup base such as the premium mala soup, premium king crab soup, spicy miso soup, clear chicken soup and wintermelon soup. From clear and light soup base to something spicy and flavourful – there is something for everything. 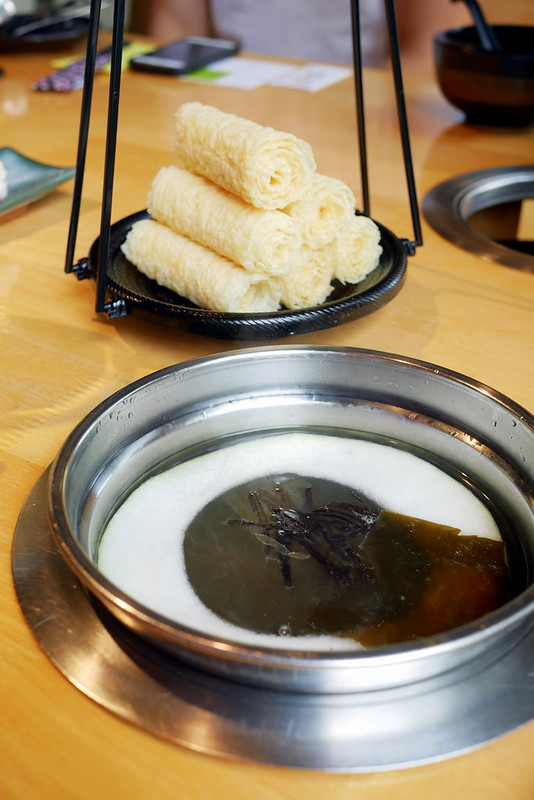 I opted for the wintermelon soup that is light, tasty and comforting. 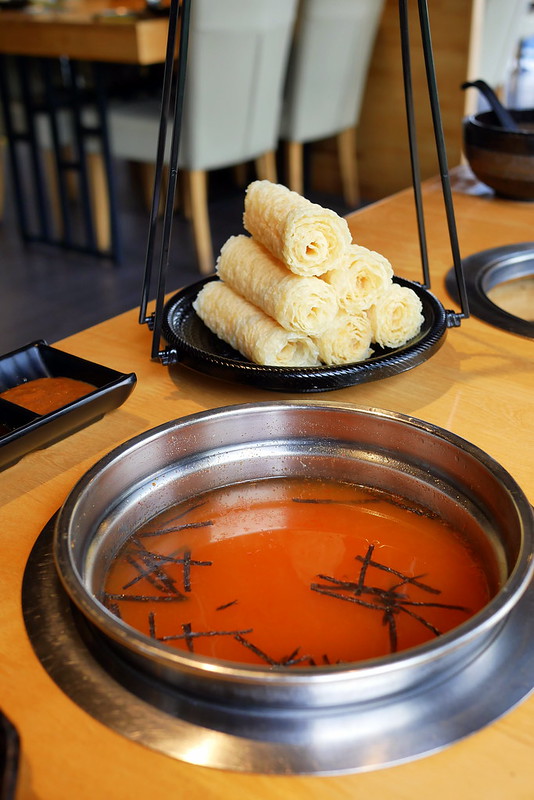 KampungBoy loves his spicy miso soup too. It has that deep and rich umami flavour. 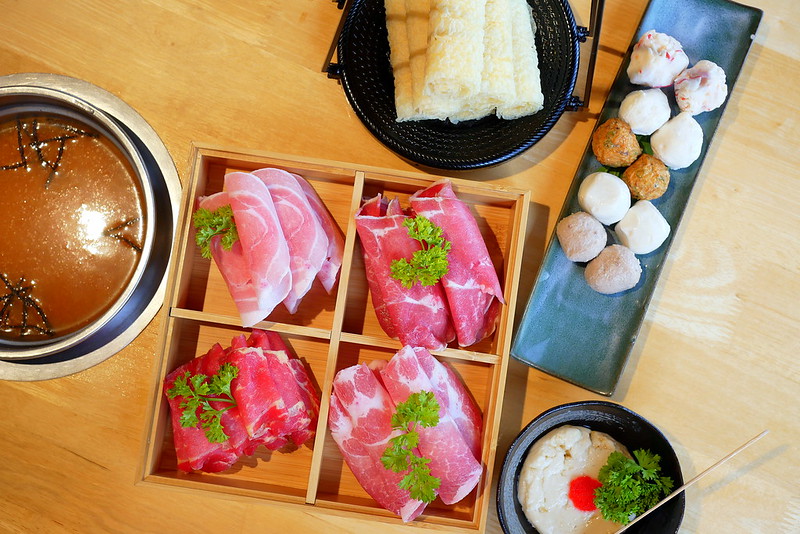 The premium meat platter (RM 52.90) that consists of New Zealand beef ribeye, Australian beef striploin, New Zealand lamb and pork shoulder is perfect for couples or small families. You get to try all 4 cuts of high quality meat in small quantity. 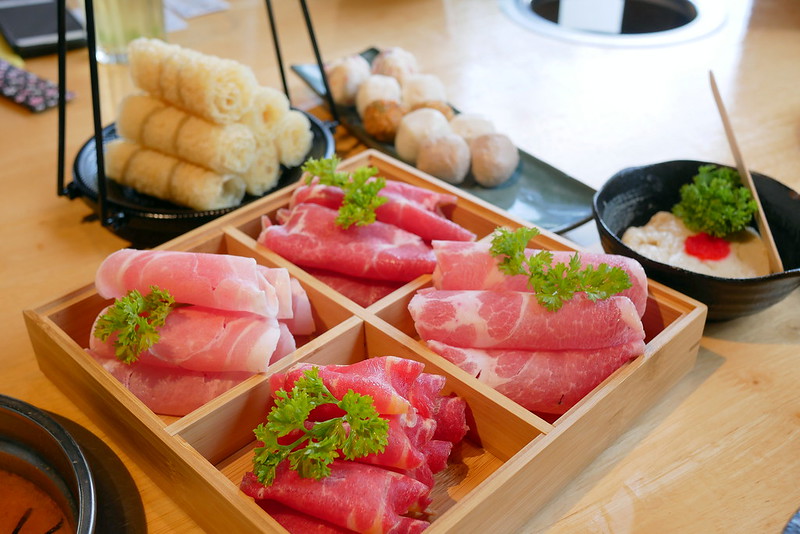 I was delighted to see my favourite special ring roll here. I love dipping them into broth in order to enjoy the semi crunchy and soft texture. Gion Signature Fish Paste, as well as the fish balls and pork balls platter were great too! The fish paste is freshly made from scratch with minimal ingredients – mainly fish. 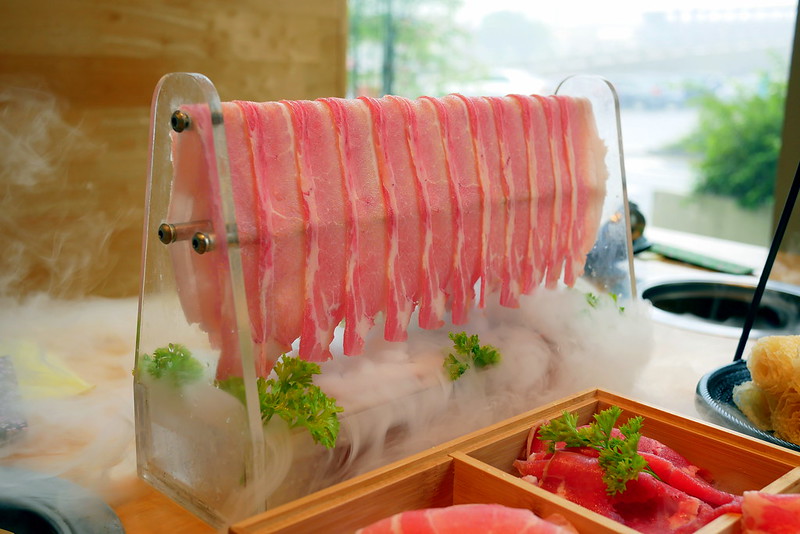 The Premium Pork Bacon Slice (RM 56.90) is not only visually appealing, but tastes good too. It has the perfect lean to fat ratio, and goes really well with our shabu shabu broth. 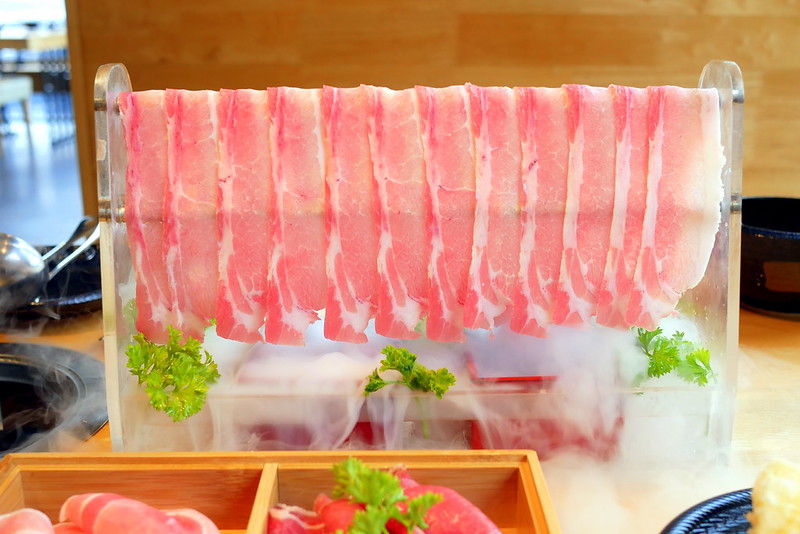 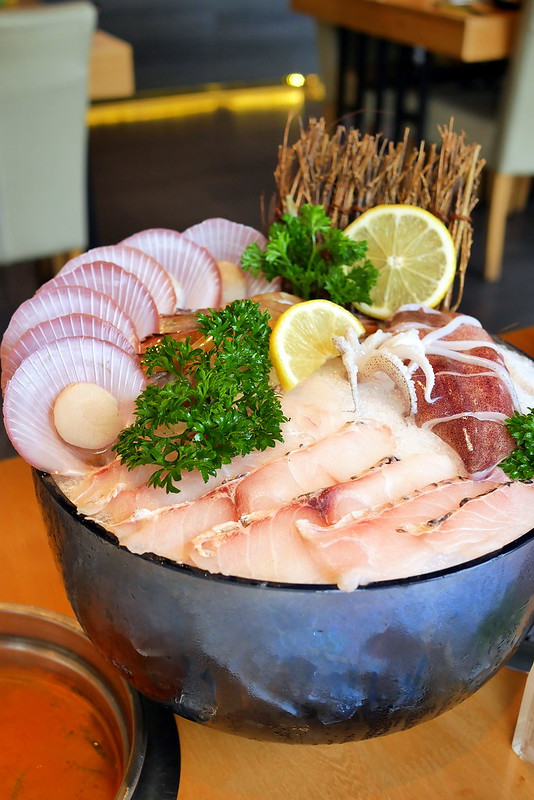 The Seafood Platter (RM 79.90) serves up generous portion of king prawns, fresh squid, snapper fish and half shell scallops. The freshness of the seafood is indisputable, especially the king prawns with firm and bouncy textures.

The vegetables are just as important as the meat because it adds natural sweetness to the broth that you will gratefully sip at the end of the meal. The selection of vegetables and mushrooms at Shabu Gion is really fresh. We had the Garland Chrysanthemum (Tong Ho, RM 10.90), radish (RM 9.90) and shiitake (RM 19.90).

Don’t forget ‘shime’, meaning ‘the end’ in Japanese. For shabu shabu, shime means adding rice or noodles to the leftover broth because it would be a shame to let the most flavourful broth goes to waste. We added some yee mee instead of traditional udon and it was equally delicious. 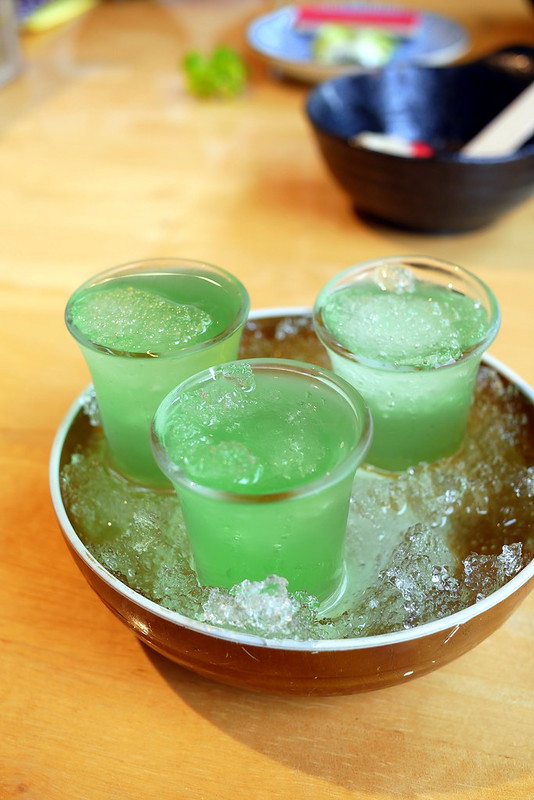 We really enjoyed our meal at Shabu Gion. The quality of food and preparation was impeccable and it was a great experience. The price point is a little bit higher than your normal buffet shabu shabu restaurants, but you get what you paid for. However, they do offer sets at reasonable pricing, for example the deluxe shabu set for 2 starts from RM 63.90.

Recently, my family and I flew to Adelaide for our family trip. Doing a free and easy trip like this enable us to visit…