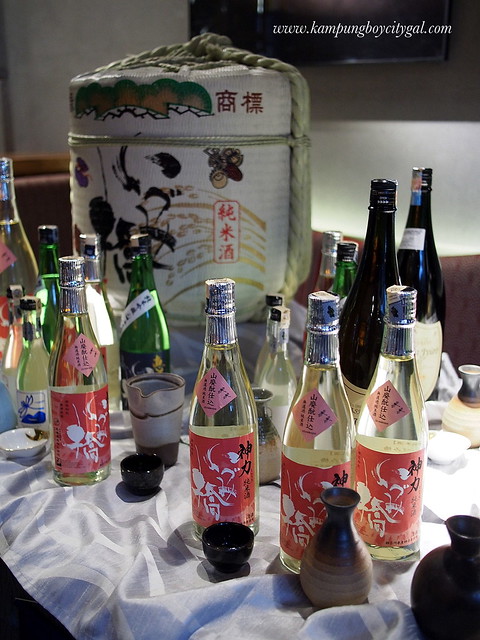 Kampachi at Troika, Jaya 33 and Pavilion KL is one of the Japanese restaurants that we frequent a lot. The reasons being? Comfortable environment, consistent food quality, attentive and friendly services. Yes, pricing is a bit on the higher side but you often get what you are paying for.

So when an invitation for a 9 course sake pairing came from the restaurant itself, we could not say “NO”.  In conjunction with Izumibashi brewery’s first visit to Malaysia, Kampachi hosted a 9 course lavish dinner that took place at their Troika outlet on the 16th of June. The restaurant was fully booked through out, and we were one of the lucky diners. 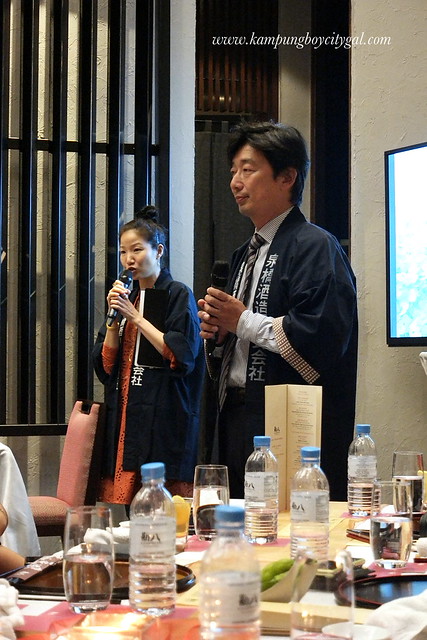 It was an insightful night as the 6th generation founder/owner of Izumibashi brewery, Yuichi Hashiba, and sake sommelier, Shigeyuki Masaki shared with us some of the philosophy behind the art of sake making, as well as rice farming. The brewery grow their own rice to ensure that their sake quality is top notch. We were also told that sake brewing happens only during winter, and the workers have to wake up at 4 am to start the process of sake brewing. Hence, every single drop is precious. 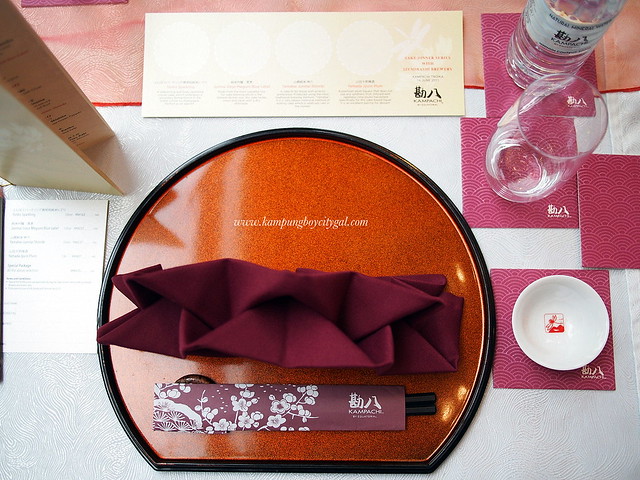 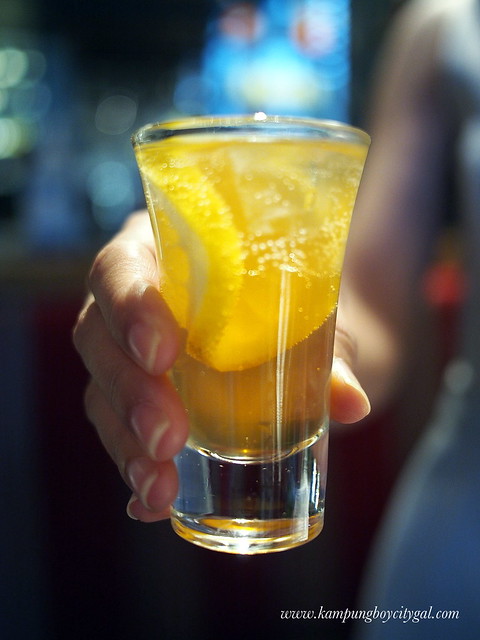 Sake and food is hardly rocket science. It works just like wine does. I am glad that we have both the food expert and sake expert that are sure to bring out the best of both the food and the sake. 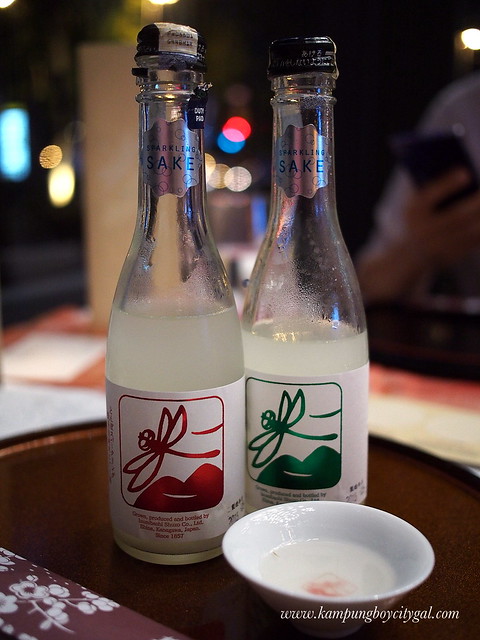 The first three courses were paired with Tonbo Sparkling, an unfiltered sake, hence the cloudy appearance. It was an easy going sake, a little gassy, making this a perfect start to our lavish meal. 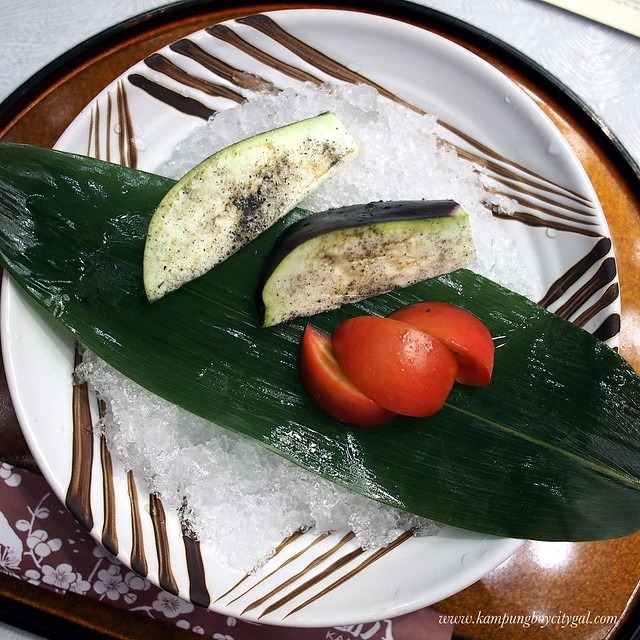 The first course was Amera tomato and slices of Raw Japanese Eggplant. These raw vegetables were just lightly seasoned with wasabi salt. The Japanese tomatoes were as great as usual, and the egg plant slices were mind blowing. They were so crunchy and so juicy that every single bite I took is an absolute pleasure. 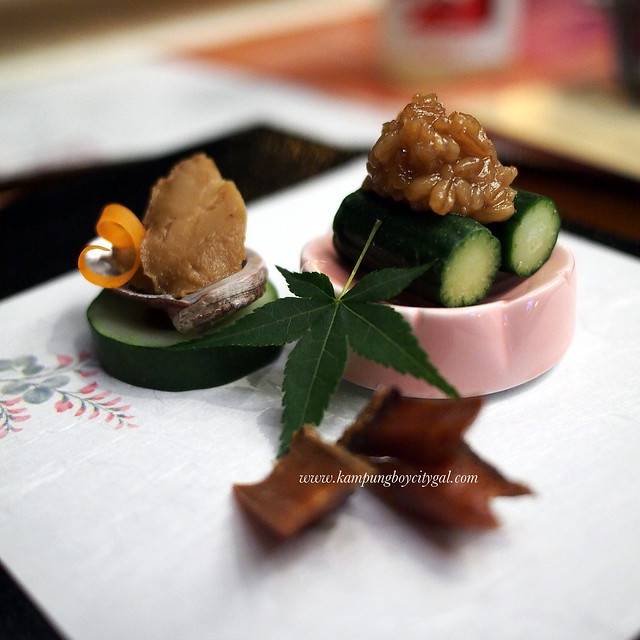 Next came Simmered Abalone, Dried Salmon & Cucumber with Miso. The dried salmon reminded us of Chinese salted fish, but a better version that makes for great beer food. 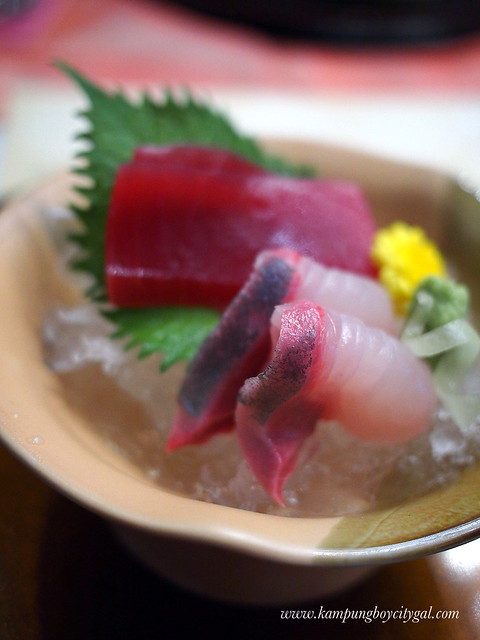 Our third course was Maguro & Kanpachi – Tuna and Amberjack Sashimi that were were flown fresh from Tsukiji market. The juicy thick cut of fresh sashimi is best eaten with Kampachi’s secret recipe konbu soya sauce. Remember to ask for that the next time you dine in Kampachi. 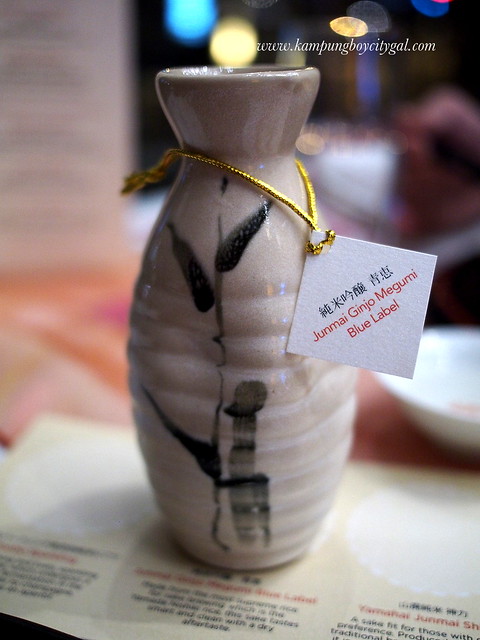 Our next three courses were paired with Izumibashi Junmai Ginjo Megumi Blue Label, made with Yamada Nishiki rice grown in house by Izumibashi. Juneau Ginjo is a type of “pure rice premium saké,” brewed with only water, koji mold, and rice with a seimaibuai of at least 60%. (40 % of the original grain polished away). Do you know that most of the “cheap” sakes that we drink has more than 50% of the original grain polished away.  The brewing process for junmai ginjo saké is usually more labor intensive, since traditional tools and methods are used in conjunction with a longer fermentation at colder temperatures. 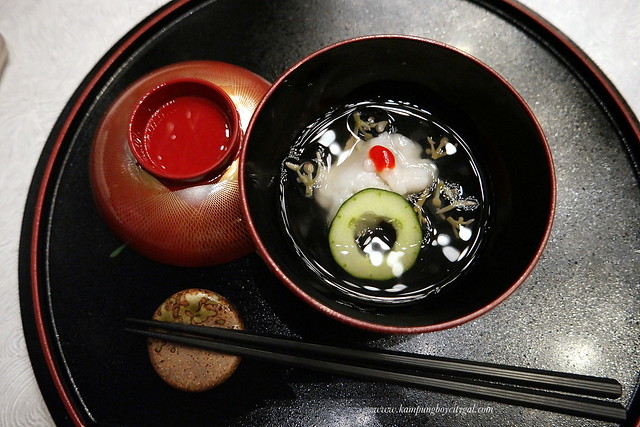 The sake is best paired with Clear Soup with Pike Conger Eel, Water Shield, Ring Shaped Cucumber & Plum. It was a very light broth with some of the freshest ingredients available. The water shield was something intriguing, like a slimy piece of seaweed with jellied layers. 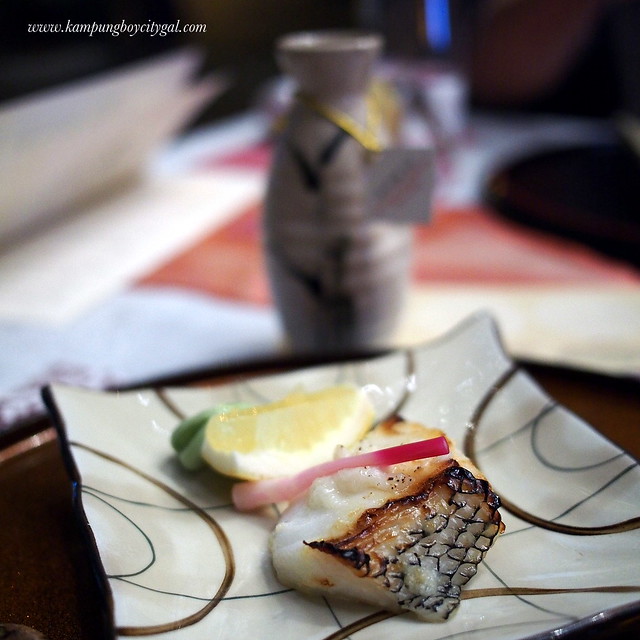 The fifth course was the simple Grilled Cod Fish Marinated with Salt Crust. It was one of my favourite dish, the skin was grilled to crispy perfection and the cod fish was succulent and fresh. 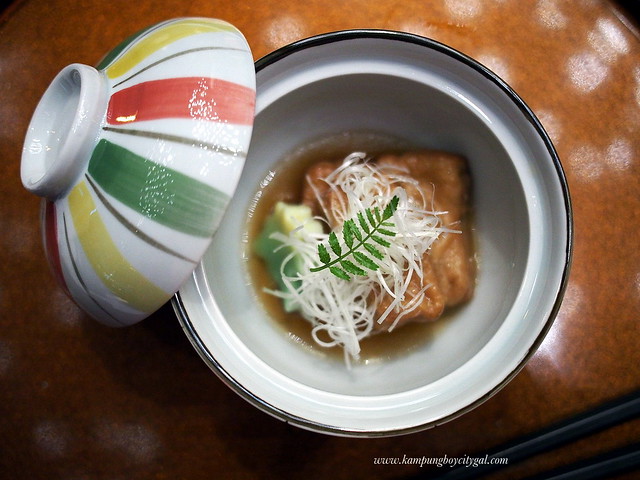 Next came the Awafu Ageni Harinegi Kinome, Simmered Yellow Wheat Gluten served with Fine Julienned Leek & Leaf Bud. The wheat gluten had fully absorbed the rich and flavourful broth, resulting in a burst of flavours as I bite into them. 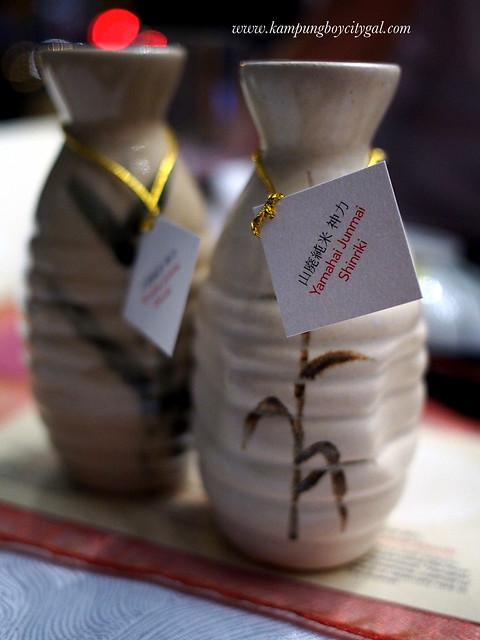 The last two dishes were paired with Izumibashi Yamahai Junmai Shinriki. Our sake only gets better and better towards the end of our tasting session. Shinriki means “the power of god”, using only premium rice grown by Mr. Ikegami in Zama and has a seimai-buai of 70%. It is also the most labour intensive sake. 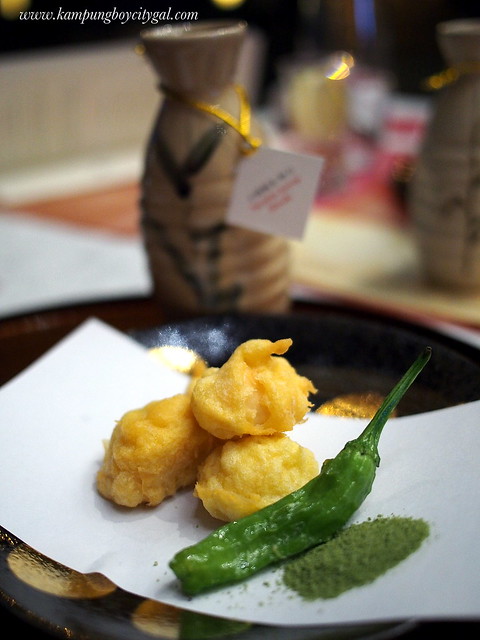 Deep Fried Chopped Prawns with Japanese Green Pepper with matcha salt.  It was actually very delicious, and refreshing as we dipped those deep fried chopped prawns with the matcha salt. Non greasy at all. 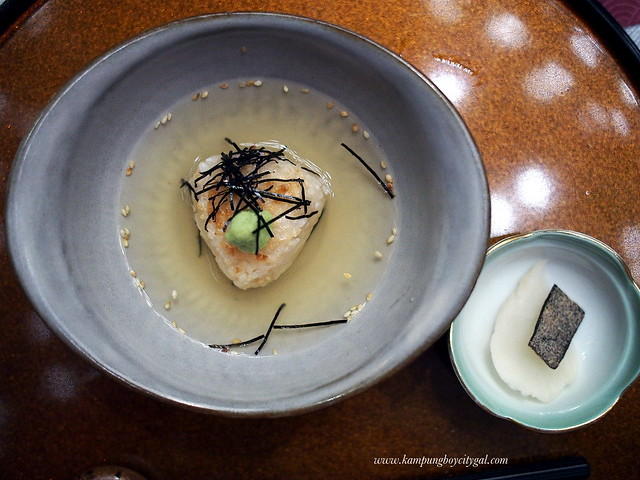 Grilled Rice Ball in Broth with Salted Kelp. The rice ball was grilled, hence we can taste a slight smoky flavour. It is like the ultimate comfort food (to me at least) when eaten together with the light broth. 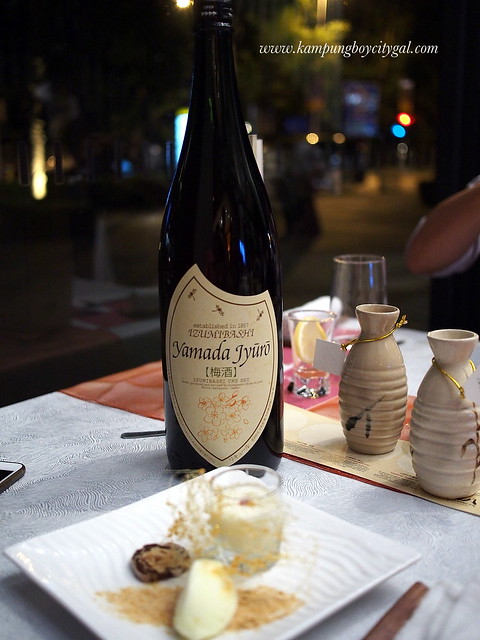 Yuichi Hashiba san brought out his bottle of premium plum liquor – Yamada Jyuro Plum during our dessert time. I can never go back to the normal choya umeshu after tasted the best that night. 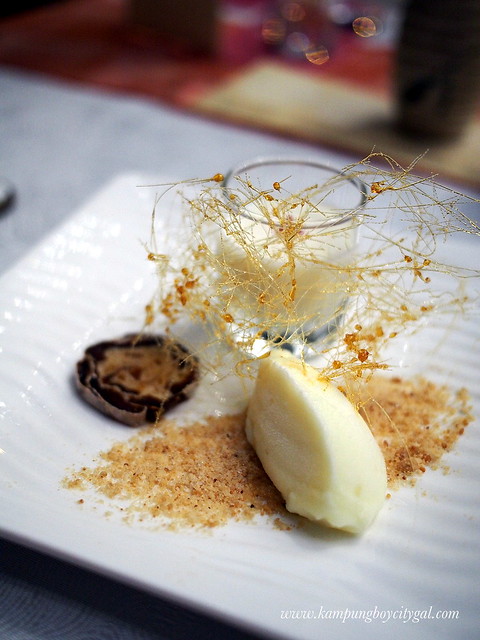 Our dessert Homemade Japanese Citrus Sorbet, Mousse and Dehydrated Persimmon arrived beautifully presented. What an appropriate dish to cleanse our palate and to conclude the dinner. 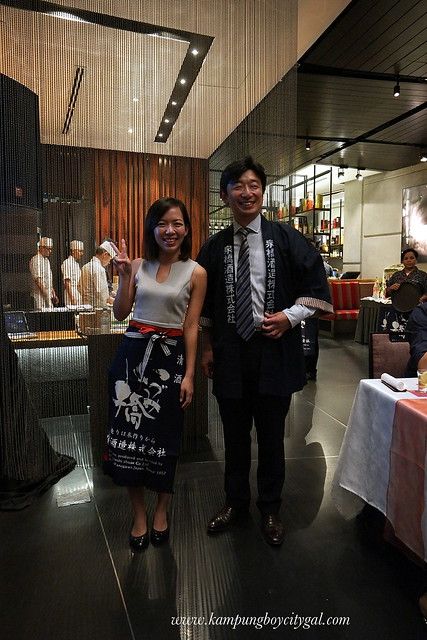 Guess what? I won myself and Izumibashi Brewery apron and an open invite to experience their winter sake making process (as a sake worker). Special thanks to Kampachi Malaysia for spoiling us crazy (as always).

When I first met you five years ago,I could not stand this arrogant man that stood before me and you dislike me for my…