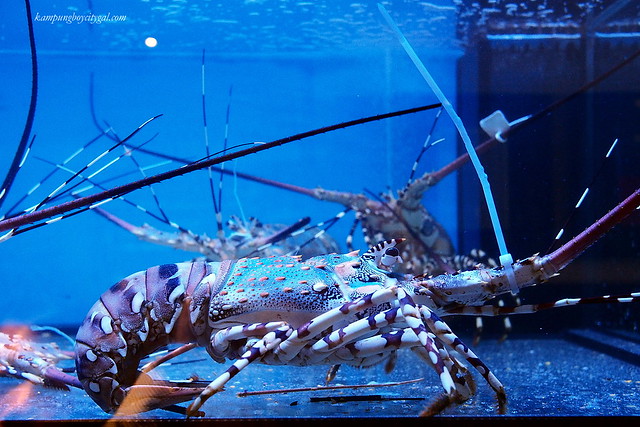 Lobster alert in Kuala Lumpur! There has been a tidal wave of openings in Klang Valley where this marine crustacean plays a starring role. One of the most prominent name we hear is Red Lobster that will make you “sea” food differently. 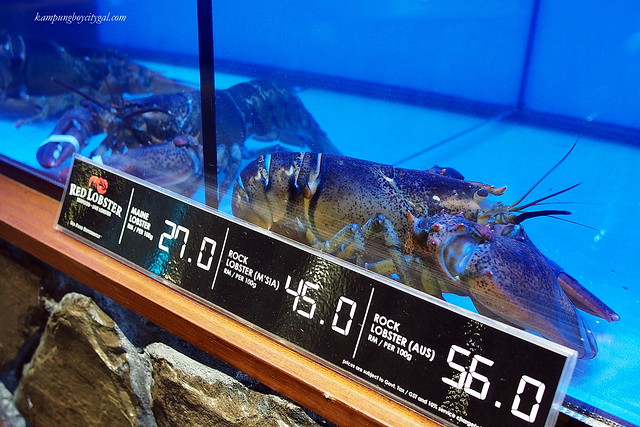 Red Lobster is an American casual dining restaurant chain that is headquartered in Orlando, Florida. It has history dated back to the 1960’s and with more than 700 locations in North America, Canada, South America, the Middle East and Japan.

Red Lobster is most famous for their live Maine and Rock lobsters. They can either be steamed or roasted with a crab-and-seafood stuffing at an additional charge. These most sought after live lobsters are being sold on seasonal prices which will be displayed on a daily basis. The Maine Lobster is selling for RM 27 per 100 grams while the Australian Rock Lobster costs RM56 per 100 grams. 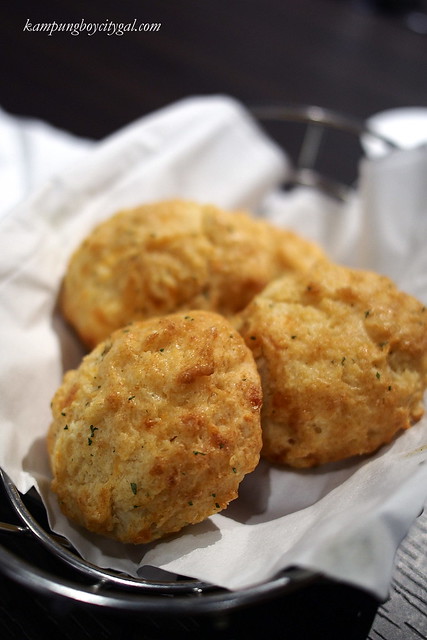 Red Lobster also offer ala-carte menu that makes this costly delicacy affordable for those of us who don’t run a million dollar business.

I like how Red Lobster offers complimentary Cheddar Bay Biscuits. It was absolutely delicious and best eaten when it was still warm. Crumbly, cheesy, and the best biscuits ever. Patrons get to enjoy basket after basket of these warm, cheesy goodness if they like it. 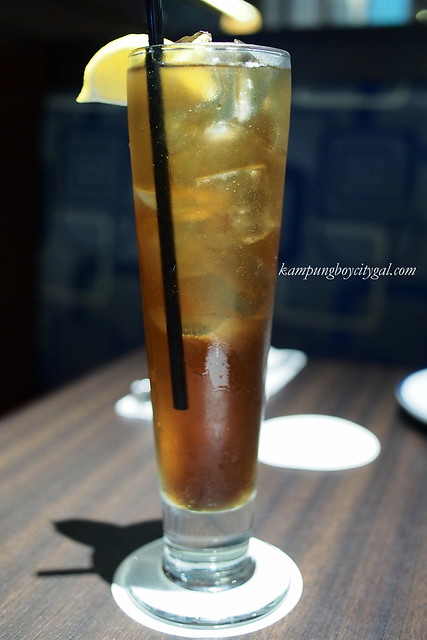 Red Lobster’s food is prepared without pork nor alcohol; however they maintain a separate bar that offers cocktail drinks and wines. Be expect to see some old favourites such as Long Island Tea, Mojitos & Margaritas (RM22.90) here. 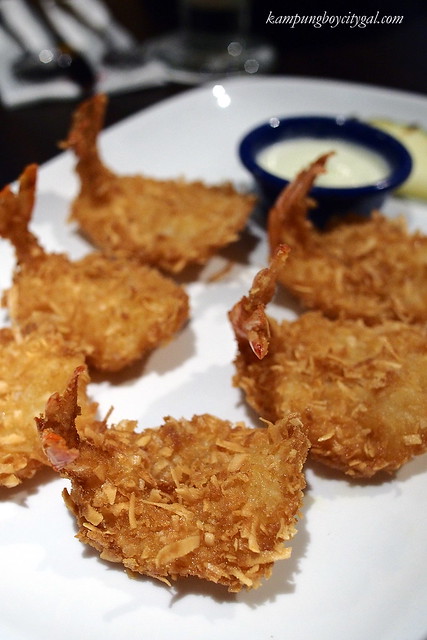 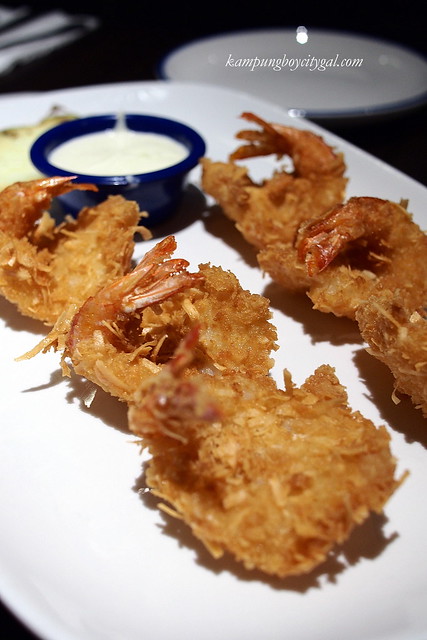 This shrimp dish has a little bit of everything: it’s sweet, crunchy and all around delicious. The jumbo butterflied shrimps were hand-dipped in Captain Morgan Parrot Bay Rum flavored batter and coconut flakes, and served with pina colada dipping sauce. Biting into the crispy crust revealed sweet, juicy and bouncy shrimp underneath; while the sweet and tangy sauce gave it a refreshing touch. 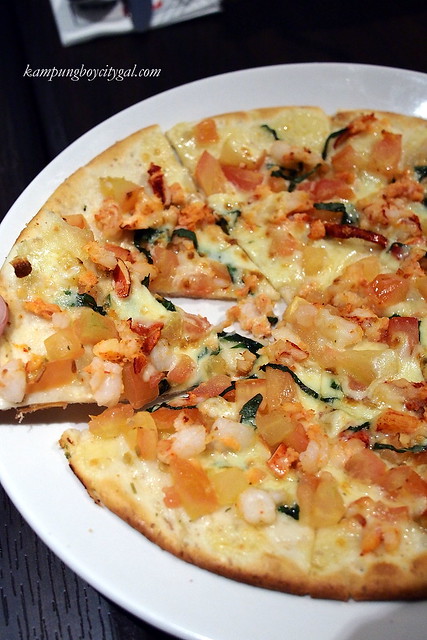 Other starters that we had was the Lobster Pizza (RM36.90). The thin crust pizza was topped with a generous amount of Maine lobster chunks, fresh tomatoes and mozzarella cheese. Red Lobster never skimp on the ingredients but our only gripe was that it tasted a bit bland. However, there is nothing that a drizzle or two of tabasco can’t do. 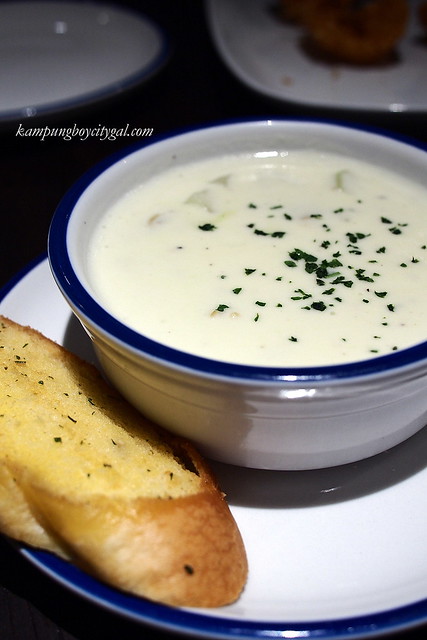 Soupy noodles are the best thing to have this monsoon season. New England Clam Chowder (RM10.90 per cup, RM17.90 per bowl) was so rich and creamy and loaded with plenty of clams and potatoes. 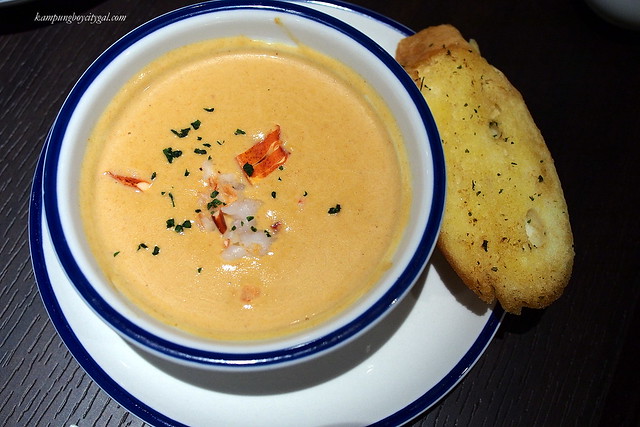 However, we preferred the Lobster Bisque (RM11.90 per cup, RM19.90 per bowl). It was also rich and creamy with a generous amount of lobster chunks. However, it had that extra wonderful depth of flavour and was expertly salted. 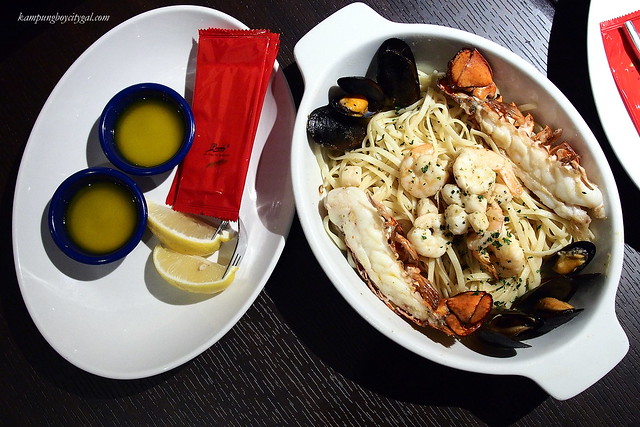 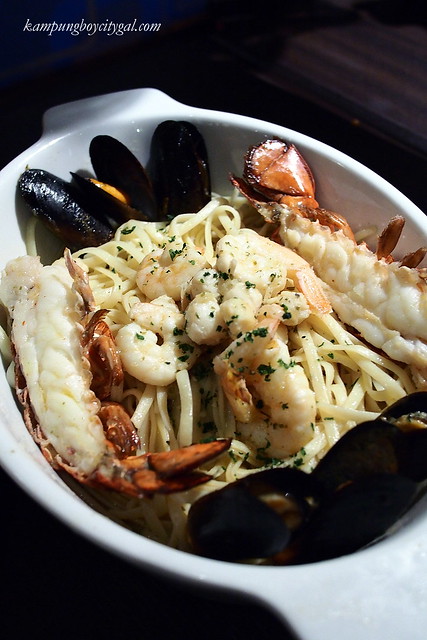 Here comes our main courses! The Bar Harbor Lobster Bake came with a split lobster tail, shrimp & scallops on a bed of linguine in a savoury broth. Main courses in Red Lobsters are great for sharing as they often come in huge portions. 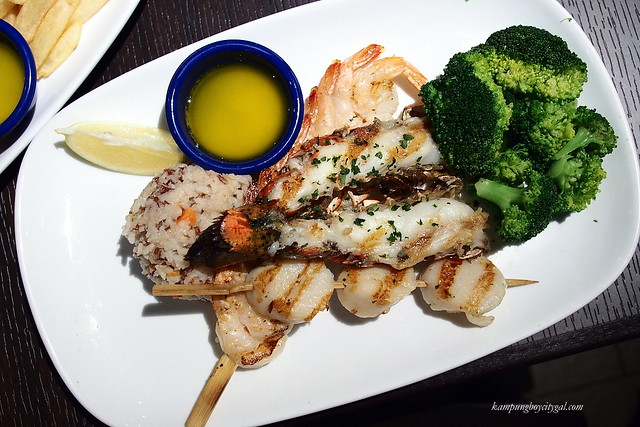 The split Maine lobster tail was cut and prepared so nicely that we do not need to dirty our fingers to pull the tender and succulent meat out. We enjoyed having the huge, bouncy and fresh scallops too. Same goes to the shrimps that “bounce” in my mouth and “crunch” when I bite into them. Together with the sides of greens and rice, it makes such a balance and wholesome meal. 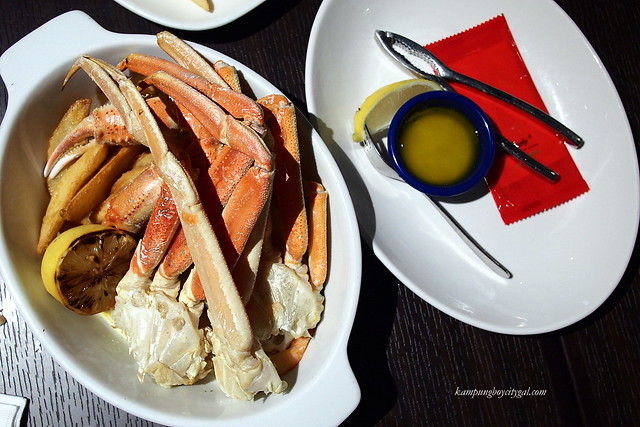 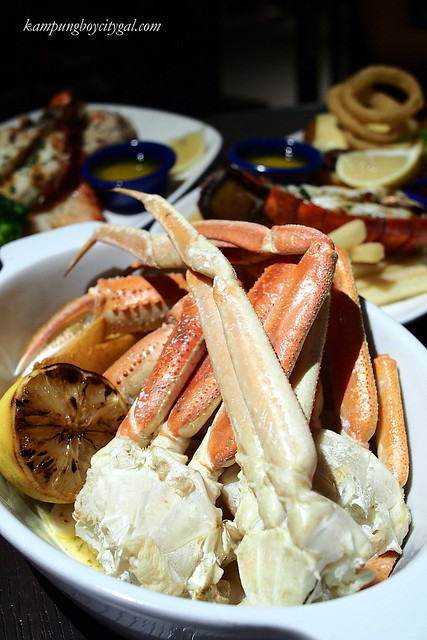 The king crab meat had a lush and springy texture, and was succulent and sweet. However, it was a tad too salty and it might be due to the sea water. 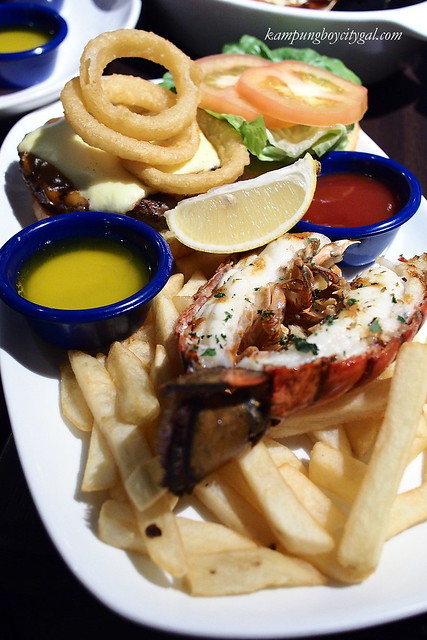 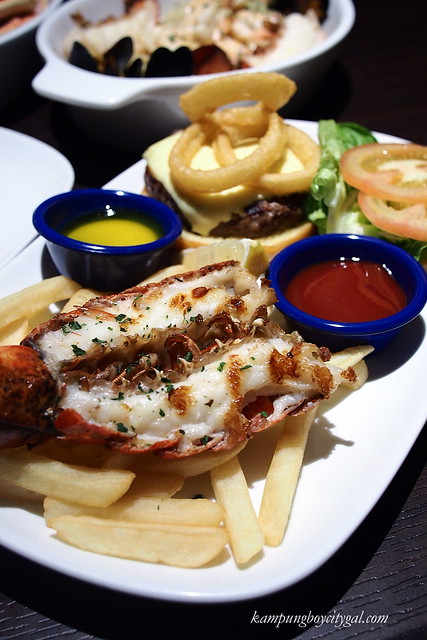 Other than seafood, Red Lobster Malaysia also serves steaks, pastas and chicken dishes. The lobster and steak burger came with a beef burger patty topped with cheese, and onion rings. There was also grilled Maine lobster and French fries on the side. The best surf and turf combination for both seafood and beef lovers! 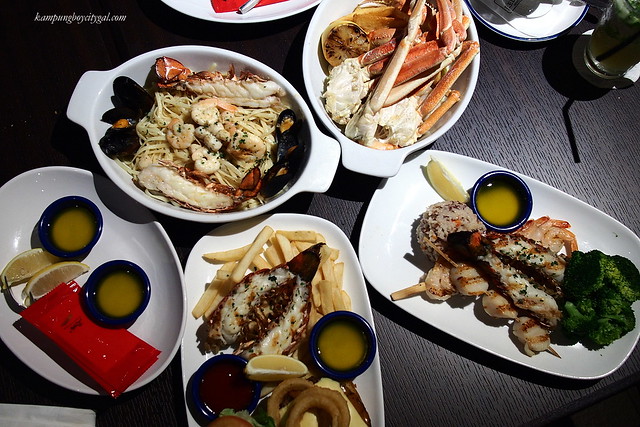 The four main dishes that we had is enough to feed a party of 6 – 8 person. Remember to try Red Lobster’s signature (clarified) butter sauce. It gives the seafood extra flavour and luscious mouthfeel. 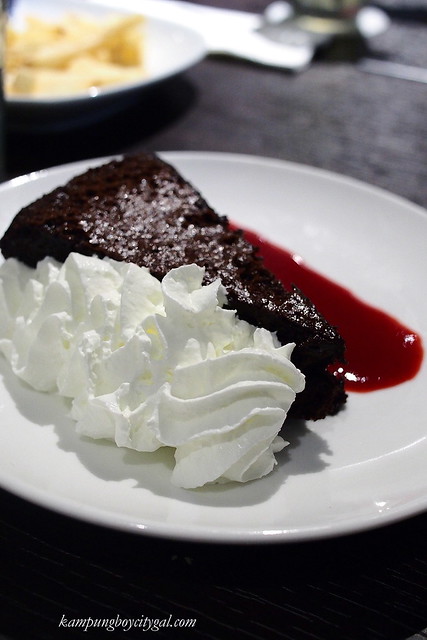 Our sweet ending came in the form of Double Chocolate with whipped cream and strawberry sauce (RM15.90) and Cheese Cake (RM15.90). 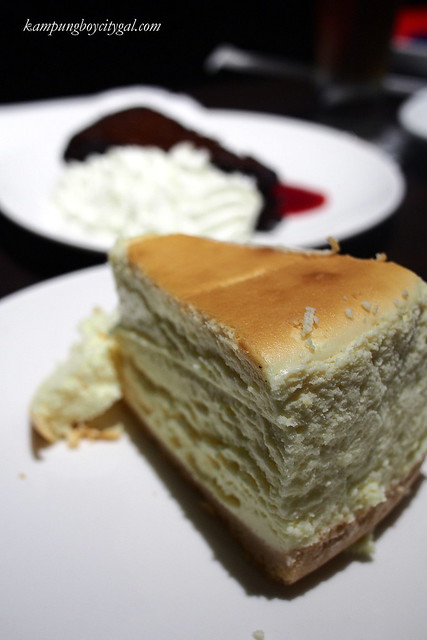 Sometimes you just have to spoil yourself with a deliciously sweet and sinful treat, and we walked out feeling satisfied.

Our lunch was such a great lobster indulgence. The Parrot Isle Jumbo Coconut Shrimp, Lobster Bisque, Grilled Lobster, Shrimp & Scallops was definitely our favorite dishes of the day.