The AREX is comprised of two lines: an express line that goes non-stop from the Incheon Aiport to Seoul Station (a 43-min ride) and a commuter line, which runs parallel and makes stops at major subway stations (Digital Media City, Hongdae, Gongduk, Seoul Station) in the downtown area.

Taking a taxi from the airport is usually a bit costly, but may be worthwhile if you have heavy baggage or are traveling in a group. Depending on your destination, the fare for a standard taxi from Incheon International Airport to downtown Seoul can be anywhere from 60,000 to 100,000 won. The 7,500 won toll for the Incheon International Airport Expressway is the responsibility of the passenger, not the driver. 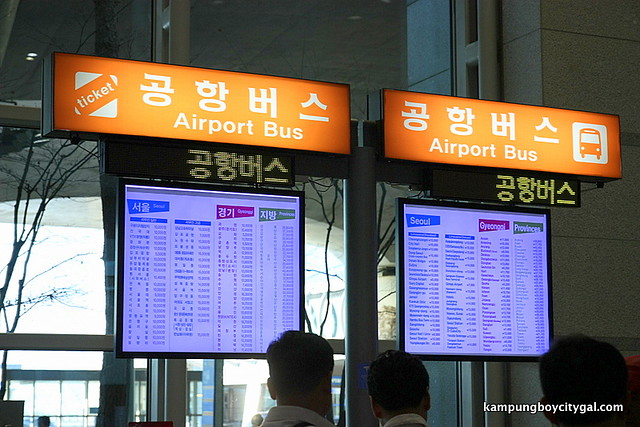 Airport limousine buses are still the most preferred transportation option for those with heavy bags and those traveling from the Incheon International Airport to areas in downtown Seoul not directly served by the AREX.  Airport bus ticket booths are located on the Arrivals Floor (1F) of the Passenger Terminal next to Gates 4 & 9 inside the terminal and Gates 4, 6, 7, 8, 11, 13 and 9C outside the terminal along the curb. Detailed inquiries on bus routes and bus stops can be made at the Airport Information Desk, also conveniently located on the first floor. 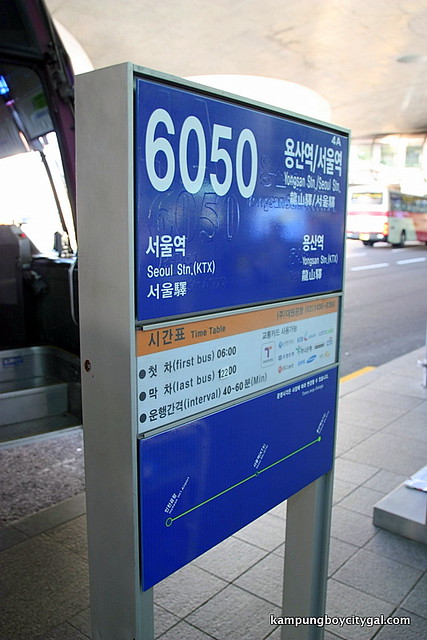 There are two types of airport buses: deluxe and standard. Deluxe buses are KAL limousines that go straight to major hotels in Seoul. These buses make less stops (making for a faster travel time) and have comfortable, more spacious seats. Standard limousine buses stop at more locations along their route, so you may be able to get closer to your final destination. Airport limousine buses are much more comfortable than standard city buses and you are almost always guaranteed a seat.

Print this out to enjoy 1000 won discount on Standard Limousine Bus. Each coupon is valid for one time use only. You’ll need to print it out and show it to the bus driver to be entitled for the discount.

Click on the link below, enter your destination, and press ‘Search.’ Under the search bar you will see a short list of bus numbers, bus stops, and more. Click on the gray ‘Detail’ button of your preferred route for information on the first bus, last bus, fares, and other important information. 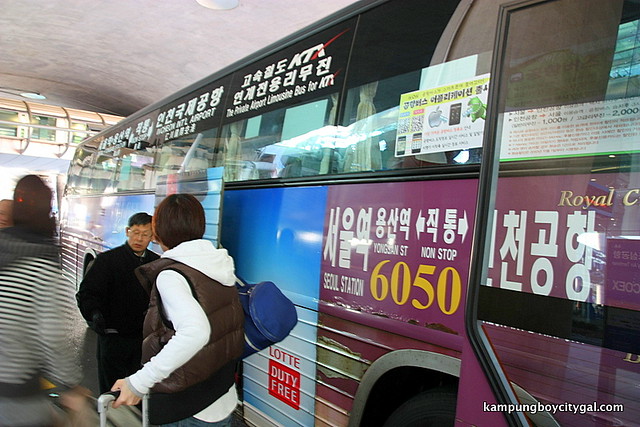 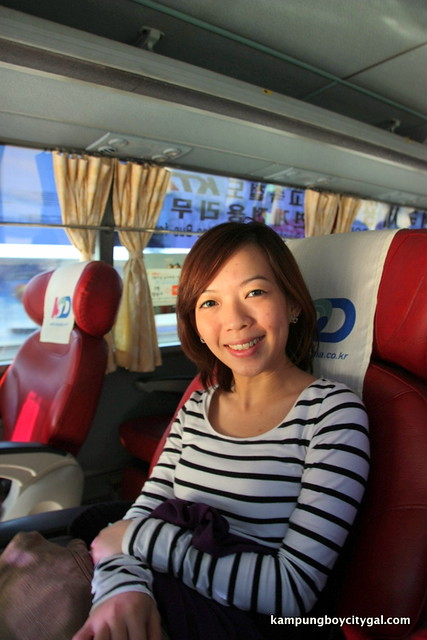 The deluxe limousine bus was spacious with good sized comfortable seats with plenty of legroom. We got a decent shut eye and within an hour, we reached our destination. 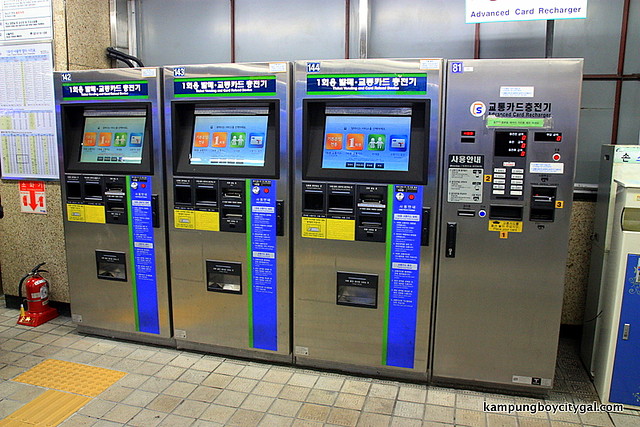 Subway systems offer a convenient way of exploring metropolitan cities in Korea. A single journey ticket within 10 km distance costs 1150 won but if you are using the T Money card, it is 1050 won.

Single Journey Tickets can be purchased using the Ticket Vending and Card Reload Devices located inside subway stations. The Devices are operated in Korean, English, Japanese and Chinese. Single journey cards can be used only on the subway. 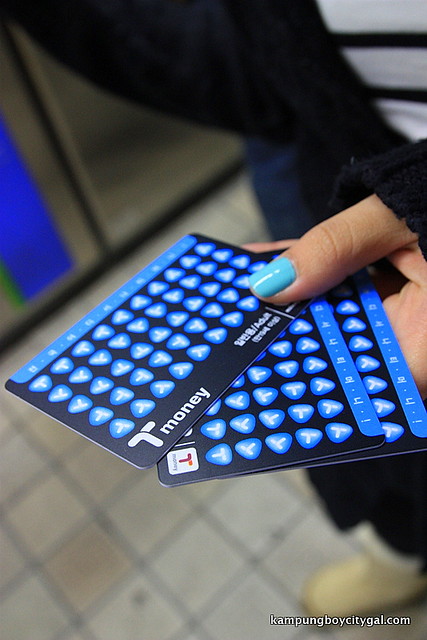 T-money Cards are rechargeable transportation cards, which can be used on subways, buses and taxis. The cards offer at least 10% discount on the basic fare.

T-money Cards can be purchased for 2,500 won each using T-money Vending Devices (limited availability) or convenient stores, and recharged with amounts ranging from 1,000 won to 90,000 won using the Ticket Vending and Card Reload Devices located inside subway stations. The Cards can also be purchased and recharged at convenience stores and vendor kiosks with the “T-money” signboard. 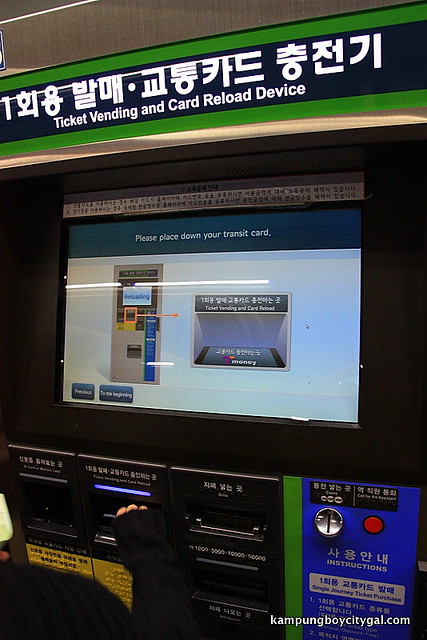 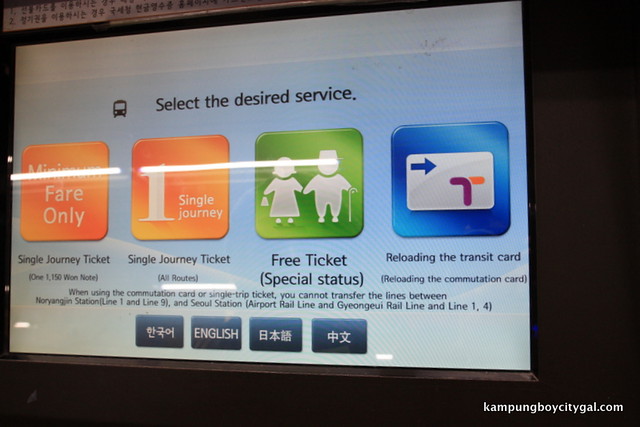 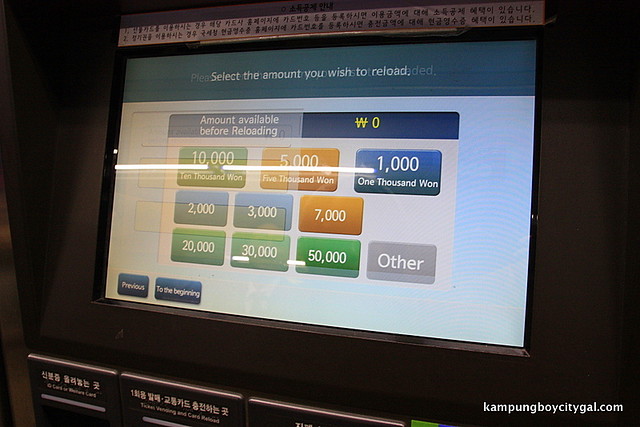 1. Select your preferred languge.
2. Touch the ‘T-money Card’ box on the right side of the screen.
3. Place your T-money Card on the recharging pad.
4. Select the amount of money you wish to recharge.
5. Pay the total recharge amount. The Device takes 1,000/5,000/10,000-won bills and 50/100/500-won coins.
6. Wait briefly while the Device recharges your T-money Card. Once the card is recharged, check its pre-/post-recharge balance. 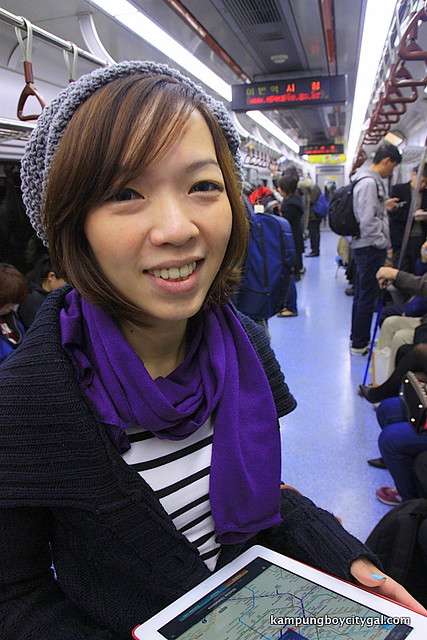 There are a total of 12 subway lines in Seoul alone. The route map looks as complicated as a spider cob web; just download Jihachul app onto your smart phones/tablets and you are ready to go!

In Seoul, buses are one of the most convenient and readily available forms of transportation. For more information on Seoul buses, click here.

Regular Taxis (silver): The fare system is based on both distance and time. Fares begin at ￦2,400 for the first 2 kilometers and go up incrementally ￦100 every 144 meters beyond that. If the taxi is going less than 15 kilometers per hour, an additional charge of ￦100 per 35 seconds is added to the fare.

Deluxe Taxis (black): Deluxe taxis called “mobeom” taxi in Korean, are black with a yellow sign on the top and the words “Deluxe Taxi” written on the sides. They offer more passenger space and a much higher standard of service. Fares are ￦4,500 for the first 3 kilometers and ￦200 for each additional 164 meters or each 39 seconds if the speed drops below 15 kilometers per hour.

International Taxis (orange): Korea launched a special “international taxi” service, where the taxi drivers are able to speak English or Japanese.  These taxis operate on a 100% reservations basis, and taxi fees can be calculated by meter, by destination, or by time.  For example, if you chose to hire a regular taxi for three hours it will cost 50,000 won, and you can even hire it for a day for 120,000won. The fees for these new international taxis can be paid in cash or with international credit cards (VISA, MASTER, AMEX, JCB).

September must be the peak birth month, where we are having a hive of birthday celebrations for the September babies every Friday/Saturday since the…