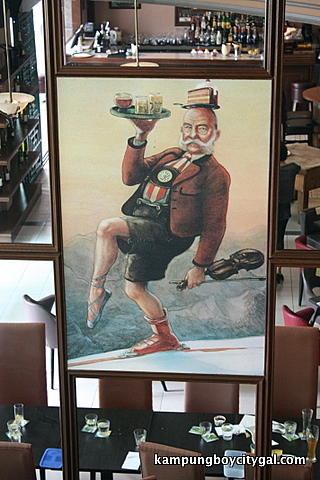 This is a carricature of the Austrian King Emperor Franz Josef I. It depicts the whole of Austrian culture in that one painting. The skis help define winter sports and the entire ski industry in Austria. The ballet shoe depicts the art and culture in Dance/Waltz. The cake sitting on the head represents the fame pastries in Austria such as the Apple Strudel. Violin represents the music industry which reminds me of Austria borned Mozart. Beer is a typical drink of Austria, Edelweiss is Austria’s national flower and the Lederhosen is the national costume of Austria for men. 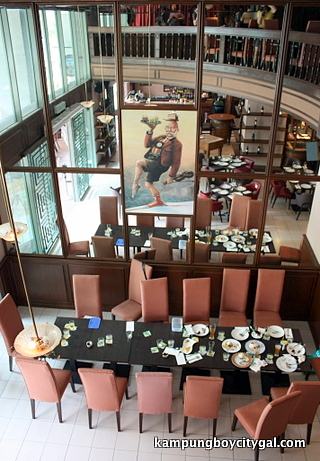 When it comes to food, the Austrians are as enthusiastic as anybody on earth. In many ways, I think that an understanding of the culture of a country’s food and recipes is an understanding of the country itself. While we do not have the privilege to travel the great distance to Austria (yet), we were lucky to be invited to Karl Beisl, a new, authentic Austrian restaurant in Solaris Mont Kiara. 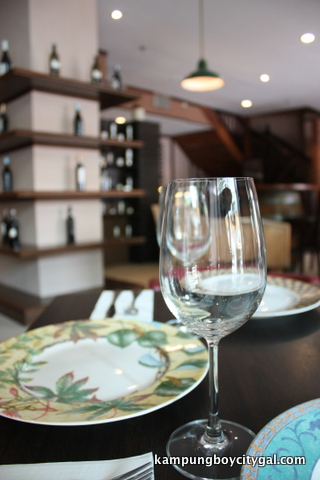 Opened and manned by Karl, an Austrian guy who resides in Malaysia, Karl Beisl is a beautiful restaurant with high ceilings and gorgeous furniture. 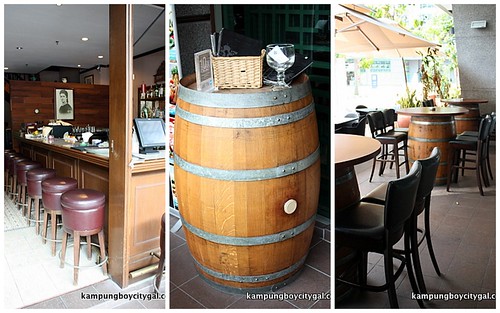 One can opt to sit at the high backed chair next to the bar, take a sip of beer, rest and watch the day passed. 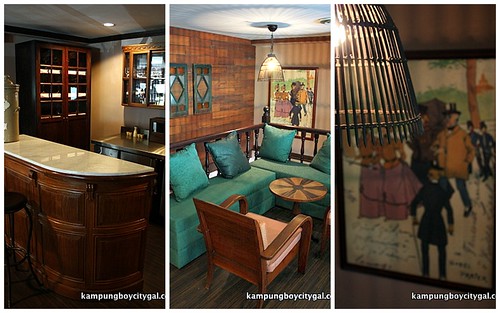 There is also a wine and cigar lounge at the mezzanine floor. A great place to relax and unwind! 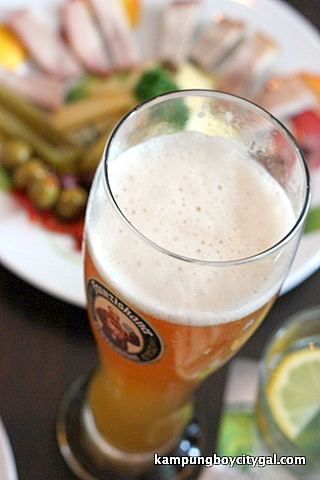 We started off the meal with a tall glass of Franziskaner Weissbier. Nothing beats a cooling wheat beer on a scorchy hot Saturday afternoon. 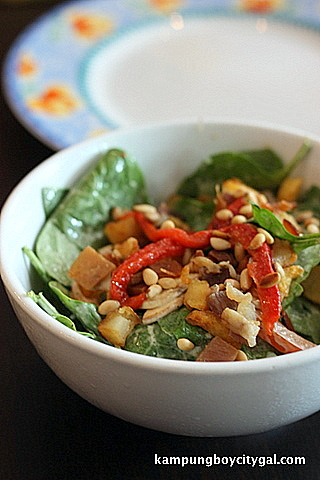 We were then presented with our first course – Spinach Salad, with Red Peppers & Bacon Strips (RM18). I like my greens, and this one is a hit on all levels. It was a winning combination of flavors. The pine nuts and bacon bits added a satisfying bite to this simple salad. 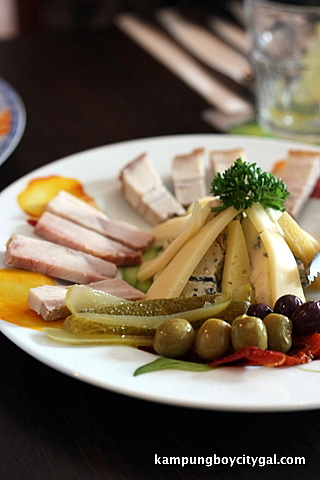 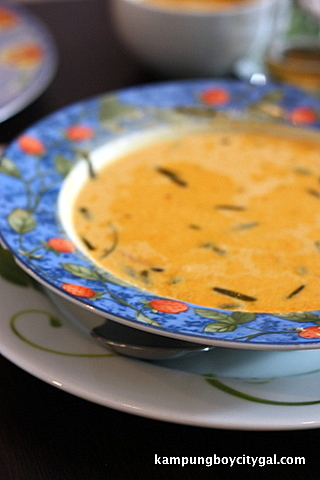 For those who can’t do without soup, please try their Cream of Roasted Garlic & Red Pepper with Rosemary (RM15) and Cream of Forest Mushroom (RM18). The soups were so rich, velvety and hearty. 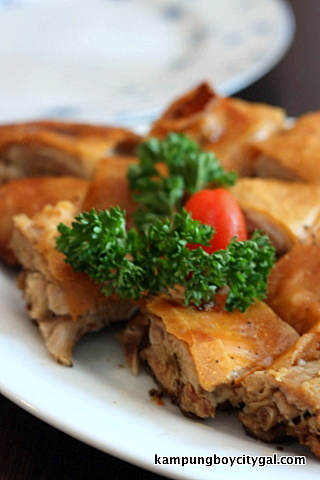 We all thought the roast to be the highlight of the afternoon. “Karl’s Beisl” Roasted Suckling Pig served with Steamed Cabbage/Sauerkraut & Mashed Potatoes (served whole at RM199++ and half at RM110++) was divine! The skin was crispy and flavorful while the meat was tender and succulent. 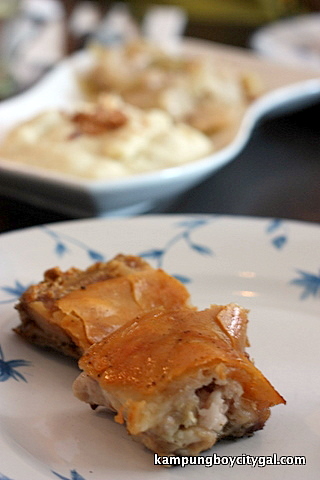 shining and dripping in its glazened glory… 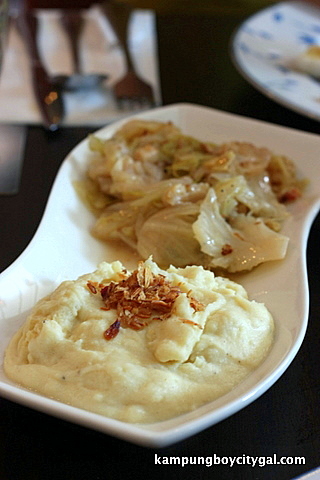 The steamed cabbages and the oh-so-creamy mashed potatoes made a healthy pork side course. 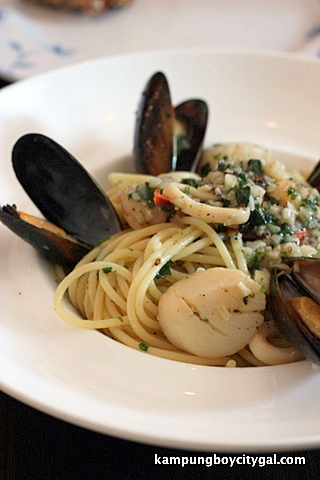 Let’s take a break from all things porcine and we have the Seafood Spaghetti with White Wine Sauce (RM30). Cooked al dente, the pasta was a winner on its own. The white wine sauce gave it a unique and delicious flavor. 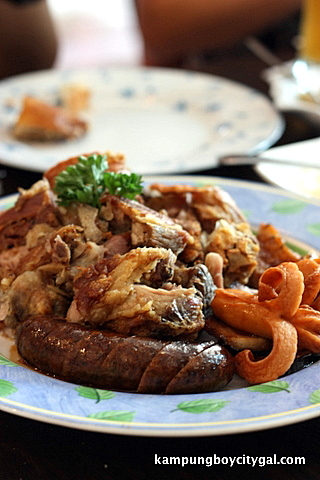 Farmer’s Platter – combination of Karl’s Beisl Roasted Pork Knuckles, Pork Belly, Kasseler Ham, Bratwurst, Frankfurter Sausage, Steamed Cabbage/Sauerkraut (RM95/RM130). The pork knuckle had crispy crackling on the outside and moist meat inside. It’s a pity some parts were a bit dry. No complaints on the hams and sausages though. 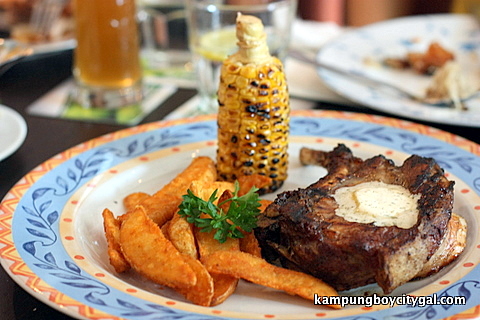 Double Rib Pork Chop RM50, a rib chop that is cut extra manly thick by including two bones. Our porkchops were a bit too thick so they ended up being a little tough. 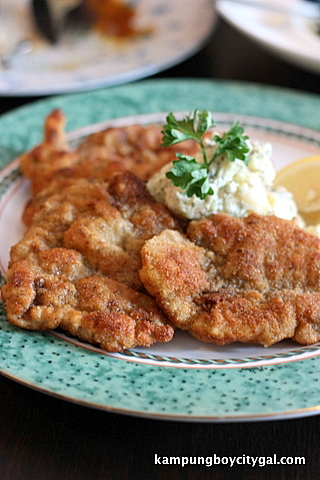 Pork Wiener Schnitzel, w/Potato Salad RM38. The schnitzel oozed some rich juices when we cut it apart. Such a beautiful scene! 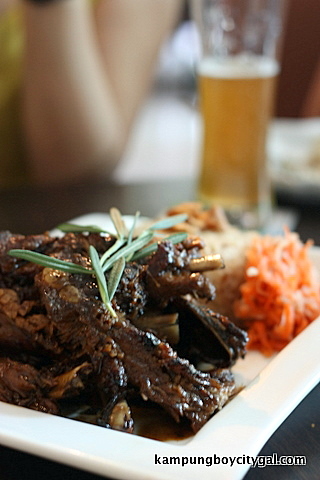 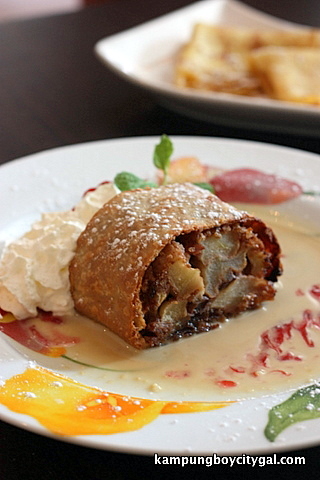 “Spare some stomach space for the dessert!”, Karl’s wife warned us. The wait stuff brought us the al mighty Calvados Apple Strudel, w/Vanilla Sauce (RM20). The filo pastry was so thin and crispy, but it managed to hold the generous amount of apple and cinnamon filling in place. The apple filling is a little to sour for my liking personally though. 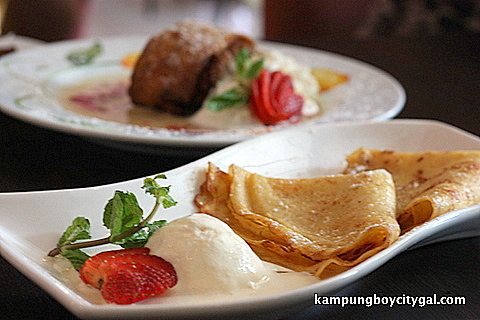 Palatschinken – Crepes, w/Apricot Jam, Rum & Raisin Ice Cream (RM18). We greatly enjoyed the Austrian crepe and KampungBoy asked me to try replicating it at home. Making the perfect crepe is an art in itself, so I’ll leave it to the chef! 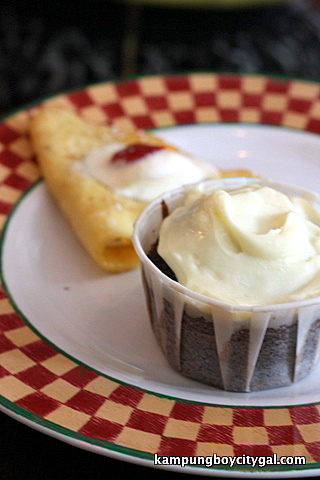 It was very kind of babe kl to bring us her famous Chocolate Guinness Cake! It was really good and I’m going to try my hand on her recipes (without any baking mishaps hopefully :p). 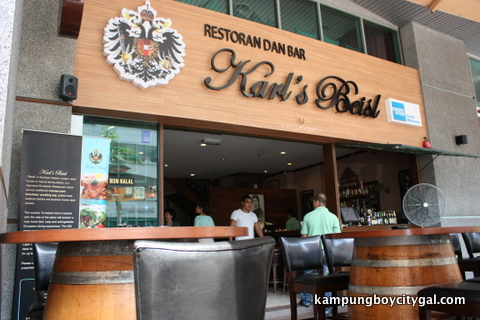 Overall, it was a very satisfying lunch at Karl Beisl and it was nice meeting some old faces like Chris, Christine, Aiwei, Cumi, Fat Boy Bakes, Pure Glutton, A lil Fat Monkey and J, the chocoholic. If you are curious when it comes to Austrian cuisine, do drop by.

Again, I’m so sorry for the poor quality of these pictures, taken by Kampungboy’s 6680. This humble little shop is located somewhere near TGV….