Last few days, we saw a spike in our web traffic, all attributable to this little hidden gem (no longer hidden now) on the street of Mongkok – Tim Ho Wan Dim Sum Specialty Shop. It has been awarded as a highly coveted star just recently. The media has created this hype over Michelin going onto the street thing and  it really adds good luck (tim ho wan, 添好運 ) to our traffic. Haha.

Some excerpts from my previous review:

“Thanks to the economic crisis, Pui Gor, former dim sum chef of the Michelin three star Lung King Heen decided that it is the right time for him to open up a tiny and grungy dim sum restaurant in Mongkok. The piece de resistance, crispy cha siu bao is said to be the best seller (>750 in a day!). “ 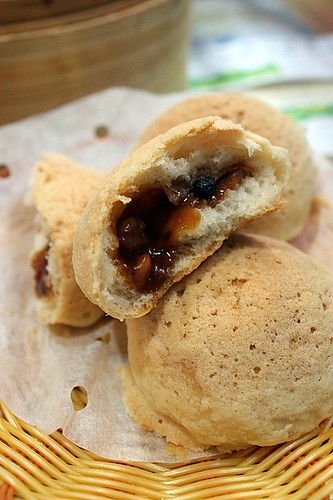 We have also tried

But it was faaaaaaar from what the list has got to offer. Will make a trip to HK again (hopefully).

A HOLE-IN-THE-WALL canteen in Hong Kong that offers dishes for less than $1.50 has become the world’s cheapest Michelin-starred restaurant.

Tim Ho Wan, which means Add Good Luck, can seat only 20 people in its steamy dining room where battered bamboo baskets of dim sum sell for as little as $1.42.

Compared with other Michelin-ranked restaurants where a meal can cost more than $400, Tim Ho Wan is excellent value.

Michelin guide director Jean-Luc Naret said it was the “most affordable starred restaurant in the world”.

The star ratings, which range from one star to three, are a rare honour in the restaurant trade, with only a few hundred in the world deemed good enough.

Three-star ratings are even rarer – only 81 restaurants are on the list. Tim Ho Wan is headed by Mak Pui Gor, the former dim sum chef at Hong Kong’s Four Seasons Hotel, where he worked at its three-starred restaurant Lung King Heen.

During the economic crisis Mr Mak branched out on his own to offer his dishes at bargain prices.

His most expensive dish, a plate of noodles, costs the equivalent of about $5.40, and he sells about 750 of his signature crispy pork buns each day.

Other dishes include a cheung fun, or steamed rice noodle roll, with pork livers and delicate jellies containing flower petals. At lunchtime, diners can expect queues of up to an hour on the street.

“Since the news broke, we’ve been really very busy,” said a waitress. “We really are very cheap, but I don’t think we are planning to raise our prices.”

“I think it’s fantastic to see a hole-in-the-wall canteen recognised,” she said. “It shows that Michelin has woken up to the fact that you don’t need all the trappings to create great food.

“Michelin always used to be about the fine china, the glassware, the cutlery and the tablecloths, but people aren’t always necessarily impressed by that. Sometimes all they want is great food.”

Still, some of the better-known Michelin-starred establishments come with equally famous price tags. The three-star El Bulli in Spain charges $422 a person for a meal without wine.

Customers spend an average of $400 a head at the three-star English restaurant Fat Duck, which was ranked the world’s best restaurant until it was displaced by El Bulli .

About Pai: Pai (not “pie”, pronounce as “baai”) is a small town in northern Thailand’s Mae Hong Son Province, near the Myanmar border, about…