If you have always wanted to re-enact those childhood days of clobbering your friends and siblings with a pillow, here’s some good news. In conjunction with International Pillow Fight Day, the same collective behind KL Freeze in Unison is bringing us the Corntoz Pillow Fight – happening this Saturday, 4th April 2009, 4 pm at……

The location of the gathering point will only be revealed on random alphabets, Corntoz Pillow Fight facebook event page, kampungboycitygal and some other participating bloggers at 2am on 2nd April 2009. 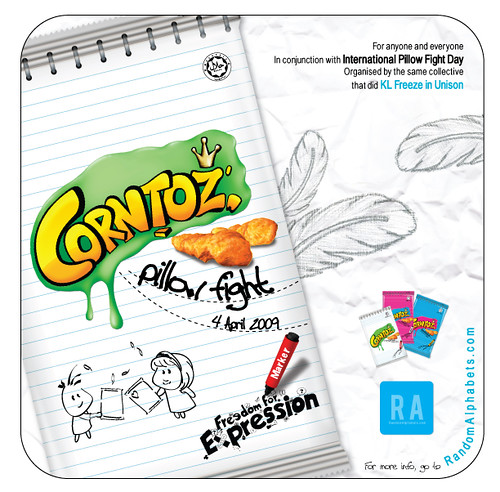 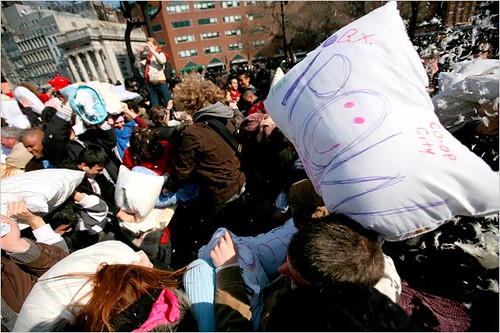 What exactly is a Pillow Fight Day? Inspired by the film Fight Club by Chuck Palahniuk in which everyone fight by rules, the International Pillow Fight Day has brought strangers from all over the world to engage in some walloping action, using soft pillow of course. It has since become an annual ritual.

Over 25 cities participated in the pillow fight flash mob which took place on the 28th of March last year. This year, KL is one of the 60+ participating cities (the full list here). It’s for everyone and you can just whomp anyone with your pillows. I believe that it will promise some thrilling excitement and fun. 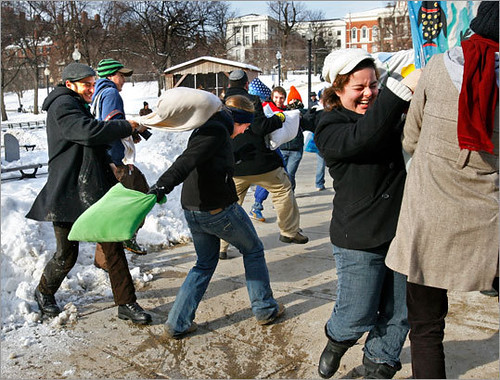 1. Show up at 4.00 pm on the 4th April, try to remain inconspicuous and conceal your pillows beneath your bags, under the tree, at your back, etc.

2. At 4.20 pm, the Pillow Fight Police will divide the pillow fighters into two groups – white & blue.

1.      To bring your own pillow, a soft pillow in particular. This is a children friendly event after all.

2.      To wash your pillow cases beforehand, unless you would want to gross out your opponents!

3.      To keep your cameras and spectacles safe. There will be a team of official photographers snapping pictures around and the pictures will be uploaded to the FB event page.

5. Not to attempt a full-fledged swing, especially guys, I mean built/buff guys. Ouuchhh! 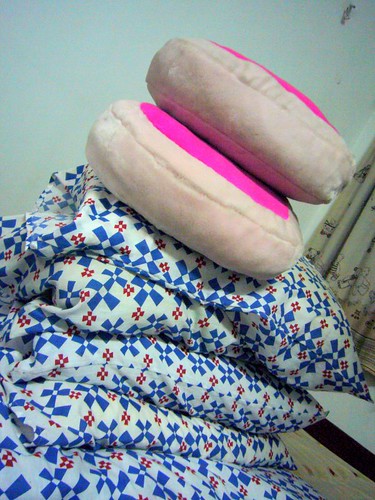 Let’s invite friends, strangers or even enemies (time to revenge!) to come together for some walloping fun. Join the Corntoz Pillow Fight facebook event page, get the word out and put KL on the International Pillow Fight Map!

I’m all geared up – look at my Battle Tools! I found SIX pillows in my room and I’m going to lug them all into my bags. Don’t you agree that pillow fight is a great way to let out your energy, stress and rage in a harmless way? See you there!